After having covered different topics in my little “What is …?” series, it is now time to put the parts together and explain what my PhD research is all about.

The preliminary title of my dissertation is “Concept Formation in Conceptual Spaces”. As you have probably already guessed, it involves both the area of concept formation and the framework of conceptual spaces.

The basic idea is the following one:

Conceptual spaces provide a nice geometrical way to describe conceptual knowledge. The framework itself says however only little about how these concepts come into existence: We know how to describe them, but we don’t really know how to discover them. The framework does tell us how to deal with a set of labeled observations: If you have ten points in your conceptual space and you know that all of them are apples, then you can derive the “apple” concept by defining a region that contains all of them. You can imagine this like drawing a region (e.g., an ellipse) that contains all these points. However, it is cognitively much more realistic, that there is a stream of unlabeled points instead of a fixed set of labeled points: The observations are typically made one after another, and not necessarily all of them are explicitly labeled. This is exactly where the idea of concept formation comes into play: Discovering concepts based on a sequence of unlabeled observations.

The following illustration shows what I’m trying to do: 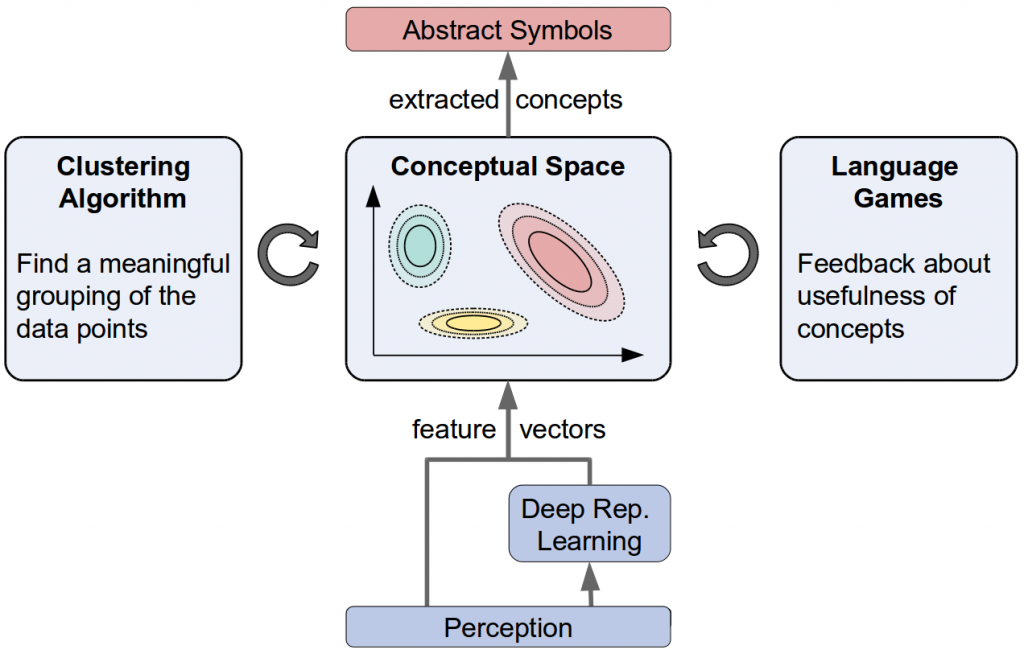 Starting from perception (bottom of the illustration), I want to derive feature vectors – either in a direct way (e.g., color can be directly represented in the RGB or the HSV space) or by using deep representation learning (e.g., to find a small set of dimensions that can describe shape). These feature vectors can be interpreted as points in a conceptual space. I plan to employ a clustering algorithm on these points in order to conduct concept formation: The clusters found by the algorithm can be interpreted as concepts in the conceptual spaces framework. Finally, one can create abstract symbols that refer to these extracted concepts. The illustration also contains a box for “language games”, but I will ignore this for now because I haven’t explained yet what language games are. I’ll follow up on this in a future blog post.

So I’m trying to use the conceptual spaces framework as a way to represent concepts. A clustering algorithm will be employed to do concept formation. The overall system will take perceptual input and hopefully yield some abstract symbols.

One final remark: Trying to find a connection between abstract symbols and low-level perception is called the “symbol grounding problem” [1] and is one of the big challenges in artificial intelligence. I therefore think that working on this problem is also a contribution to the quest of creating artificial general intelligence: any generally intelligent agent needs the ability to conceptualize the world and learn new concepts. This is why this research is not only interesting from a theoretical point of view, but also ultimately important for practical progress and therefore worthwhile to investigate.

This should give you a rough idea of what I’m trying to do, I’ll go into more detail in the future (including the progress I’ve made so far).

2 thoughts on “My PhD project in a nutshell”

Get in Touch / Stay up to date